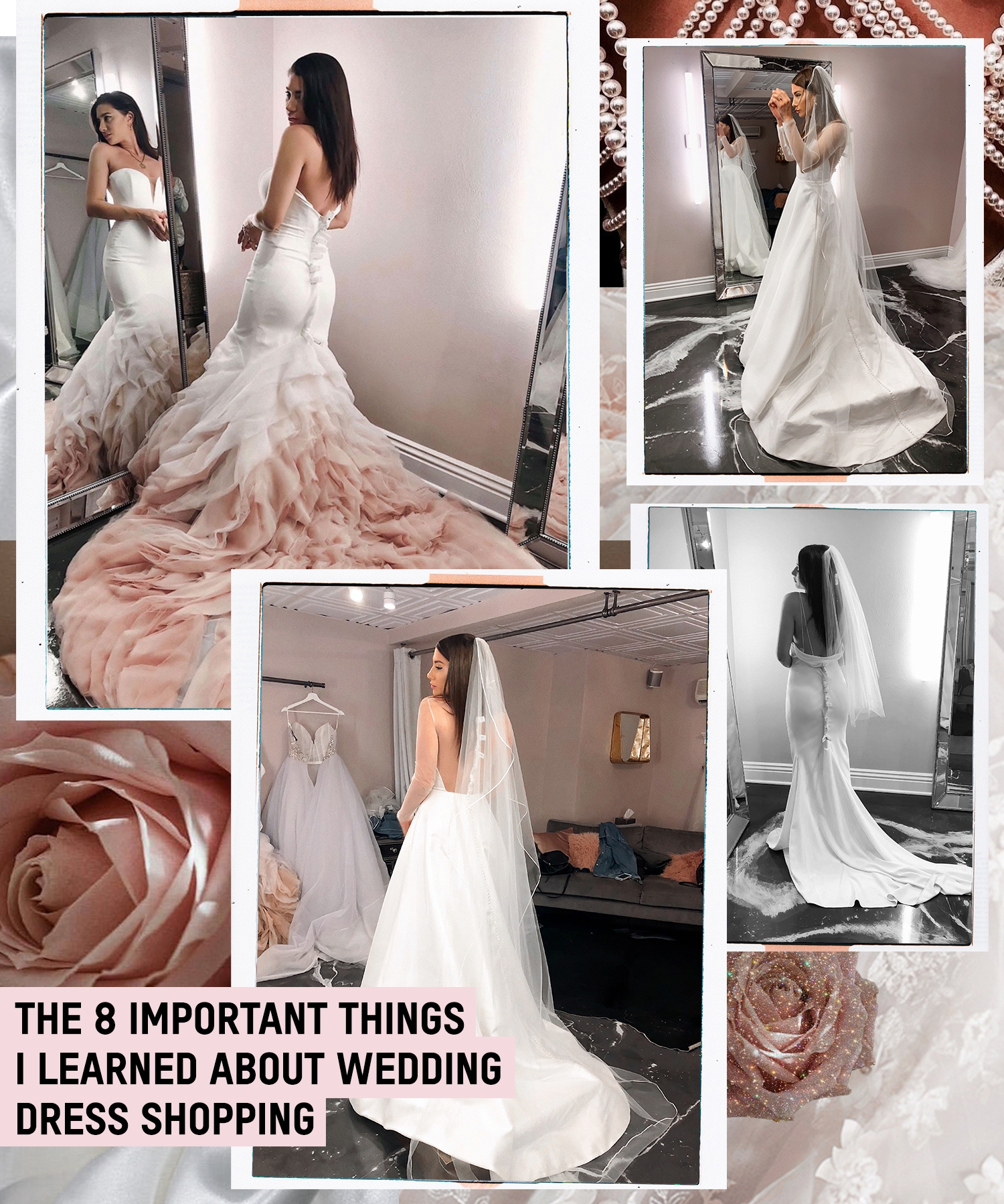 I have said it before, but I will say it again, I wasn’t born to be a bride. I didn’t dream of this day my whole life. I didn’t have a dream dress planned out in my head & TBH- I wasn’t even super thrilled about the concept of wedding dress shopping.

Of course- I was excited to find my dress, but I just have never been one for going to the mall & spending an hour in the fitting room trying stuff on. I am way more of an order online & return if it doesn’t work kinda gal.

I definitely wasn’t planning on ordering a wedding dress online, so off the bridal boutiques I went… & after 3 appointments, although I’m 10000% not an expert, I do have some tips to share with you guys to hopefully help make your dress shopping experience just a tad bit less overwhelming. LET’S GO…

Okay, so if you’re getting married (or even if you’re not), you probably have a Pinterest board of wedding dresses you like. I have had one created before we got engaged & then when we were actually engaged- I added to it like crazy. When I booked my first dress appointment, I revisited my Pinterest board & narrowed it down till I had a clear idea of what I liked.

I think it’s important you go into your appointments with a clear vision (have the Pinterest board pulled up on your phone!) because you don’t want to be saying yes to everything the bridal salesperson shows you. The amount of dresses can be VERY OVERWHELMING & trying on too many will make it so much harder for you to commit to a dress. Appointments are typically an hour long, so use your time wisely… even if your third cousin who tagged along is dying for you try on that hot pink wedding dress “just for fun”. Eye on the prize!!

THAT BEING SAID- I think it is important to try on a COUPLE of other styles that you may not have initially envisioned… just so you avoid future wedding dress FOMO!! I tried on a few gowns that were the exact opposite of what I wanted (aka major princess vibes) & to my surprise- I actually LOVED them. I can’t tell you what I got, but trying on those other dresses definitely helped in my decision making process.

2. wtf does a wedding dress sample sale even mean?:

When looking for my dress inspo, I narrowed it down by designers versus individual dresses from a bunch of different designers. This just made more sense for me as I didn’t want to run around to 10 bridal appointments so I can try on 10 different dresses. When I found a designer I liked, I emailed the boutique that carried that specific designer & was pretty much always told “oh- great news, that designer is having a sample sale coming up!”.

I had no idea what this meant, but the first appointment I booked was a sample sale situation. TO SUM IT UP: a bridal sample sale is when the designer brings in a bunch of their latest dresses for a short amount of time to a bridal boutique & anyone who books a sample sale appointment will get a discount on their dress during the sale.

I went to two sample sales & at one of them they offered me the discount as long as the sample sale was going on (i.e. you could call and order the next day), but the other I had to decide before they closed that day. The rules are different at different boutiques, but if you’re interested in a specific designer & ARE VERY CLEAR on what you want- a sample sale is a great option! Also, during a sample sale appointment, you are totally allowed to try on other designers if the sample sale designer isn’t turning out to be your vibe.

Trying on wedding dresses is serious business, so choose who you invite carefully. For my first appointment ever, I invited three people. I had a good feeling I wasn’t going to find my dress at this boutique, but I wanted to dip my toe in the pond. Out of the three people who were invited, two came (my mom couldn’t make it lol!). This was PERFECT for a first appointment cause it gave me an idea of what it is like, without feeling completely overwhelmed.

For my second round of try ons, which included 2 more boutiques in LA, I invited a small group. I am not having a bridal party, so I brought with me three friends, my mom, & my sister. I just wanted to invite people I was fully 10000% comfortable in front of. I didn’t want a bunch of different opinions coming in either that would make my decision harder than it already was, so I really feel like less is more for these appointment. Also- split up the groups!! You don’t need the same 15 people to come with you to every single appointment you go to. Everyone’s busy & that will definitely get a little annoying/bridzella-ish of you.

4. don’t overdo it with the appointments:

& on that topic, let’s talk about the amount of appointments you ladies are making. To each your own, for sure, but I think making more than 3-4 appointments is honestly going to make your life/decision making process SO MUCH harder.

It’s a big decision, of course, but the act of trying on wedding dresses can be physically exhausting & emotionally draining. I booked 4 appointments- one in San Diego (my first “dip your toe in the water” appointment) & then three more in LA. I didn’t make it to the last LA appointment because I found my dress. So, I went to three appointment total & I think that was perfect. I wasn’t burnt out my the last appointment & I tried on enough dresses to be 100% confident in my decision.

I had great experiences at all the wedding dress boutiques I went to, but I have to admit- there is a bit of a cars salesman vibe when it comes to wedding dress shopping. I totally respect the hustle, but I am not good under pressure. They want to close a deal so they will throw in discounts & a free veil to get you to say yes- but you have to just drown some of this out and listen to your gut.

Also- SPEAK UP & BE HONEST!! They will have a consultation with you upon arrival to kind of nail down your vision, but just because they are a bridal consultant, doesn’t mean they will get it right. If the first 5 dresses they bring you are a hard no- be sure to express that! Don’t try it on cause you feel bad or think maybe she knows what’s best for you. If you don’t like it on the hanger, you won’t like it on. They want to make the most out of your time there as well, they will appreciate the honesty.

heads up: wedding dress sizes are much MUCH much smaller than normal street sizing, so just know that before you go. I didn’t & it was a shock when they told me I was wearing a size 8 and it was being held together by clips because it was TINY on me. Then they showed me a picture of the model wearing this exact sample dress & she was an actual real life stick figure. I felt much better, but still had a hard time envisioning the dress in my actual size when it was that small.

Some of the boutiques keeps there sample sizes larger which I much preferred since they could cinch it up pretty damn good to give you an overall idea (& it doesn’t make you feel insecure af!).

7. you can ask for customizations & discounts!!!:

once I had said yes to the dress, one of the already married ladies in my group straight up asked the bridal consultant if we could get any discounts. I honestly didn’t know if I should feel embarrassed, but they immediately said they’d ask there manager & then came back with a nice little discount.

You can also ask for customizations on your dress- which I did not know. My girlfriend said she had them add buttons up the back of her dress & add a built in corset. I would have totally asked for the built in corset if I would’ve known you could ask for that (I will now have to get one made separately).

8. don’t wait for tears as a sign of saying yes to the dress:

I already know I wasn’t born with this “bridal gene” some girls have, but shit- I think it’s a lot of pressure to put on yourself that you will know it’s your wedding dress because you break down in tears. It’s just a decision you have to make & if you are sitting waiting for water works, you might never make it.

OKAY- that’s all I’ve got! Am I missing anything? Comment below 🙂 xo

This fall, our fashion choices are a bit different than …

Alert your BFF! Your sister! Your mom! The bestselling Stars …